It feels like forever since I’ve raced, in reality it’d only been about 50 odd days, but I’d been missing it. It’s no secret that I’ve been struggling with lack of progress, or that’s been my perception anyway. I’ve been focussing on speed to try and get myself close to where I want to be, which essentially leaves me throwing weekly ‘I Can’t’ tantrums. I’ve been looking out longingly over social media feeds and spending too much time in my head, comparing, questioning, and judging myself against other people’s measurements. I needed to stop. 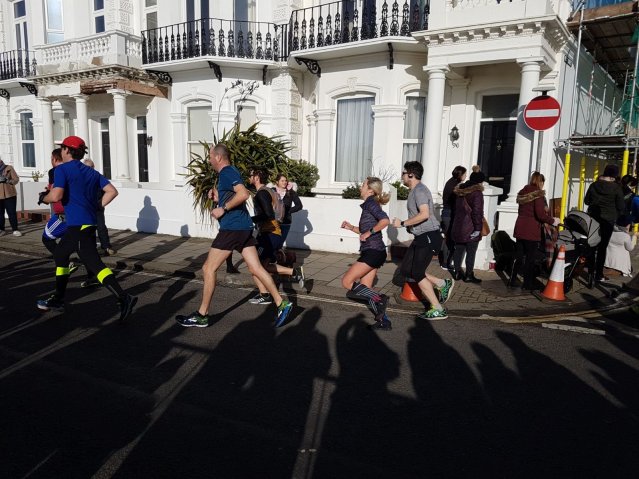 Cue Worthing Half Marathon! My initial goal was to run it and feel good about running marathon pace, set myself a little challenge, but play it smart. I’m not smart, when have I ever been smart? I messaged Kev (official Clare Pacer) the day before asking if I could throw smart out the window. After a chat about the potential risks, and hindrance that messing this thing up could do to my marathon mental state, we agreed to go out there and ‘fuck shit up’.

The start line at Worthing is basically like a massive version of Run Club. Running on home turf has you feeling like you know everyone, with the added bonus that you’re running the streets you always train on just with a couple thousand friends! It’s an odd little route winding through the streets, never being more than a stone’s throw from the beach. I quite like the twists and turns, you sort of get lost and distracted in a maze of Worthing side streets. Time melts away and before you know it your hitting the long out and back stretch that will eventually bring you to the finish.

I felt good, I kept trying to speed up (standard operating practice for me) and having to be pulled back quite literally at times. The sun was out and it was a perfectly crisp winter’s day. I knew miles 7-10 would be tough as this straight was going to have a killer headwind, I wanted the safety blanket of banked time, a bad habit I have. Kev kept reassuring me I didn’t need it, I was strong enough to run the distance at this pace and maintain. I wasn’t sure I believed him, but I listened and paced it out.

As the miles ticked off I hadn’t once seen an 8 pop up on my watch it was always a 7 something, I couldn’t quite believe I was running this and feeling so comfy. Turned the corner, BAM headwind! Ugh!! I knew it was going to be hard and it really was. Kev and Rob ran kindly in front of me acting as some sort of human windshield, but still it took just about everything I had to stay on pace. My breathing was shot, and the extra energy headwind seems to sap from you is insane. One thing nobody ever tells you about running faster is it is bloody near impossible to drink water out of a plastic cup when running a 7:45 pace! I digress! It was really just a hold on for dear life part of the race and although my pace dropped a little bit I was really pleased with the splits when I saw them. The sun was still shining and I was doing everything I could to stay out of the part of my head that wants to tell me I can’t.

As we turned to run back I knew the wind would be on my side, and I let everything relax back in to rhythm. Now I had no excuses but to run it home as hard as I could. I didn’t have as much energy left in my legs as I hoped but I calmed everything down and got back into a groove. Reaching that finish line my legs felt tired but I had a sneaky suspicion that if I needed to, I could do that all over again. Sprint finish for: 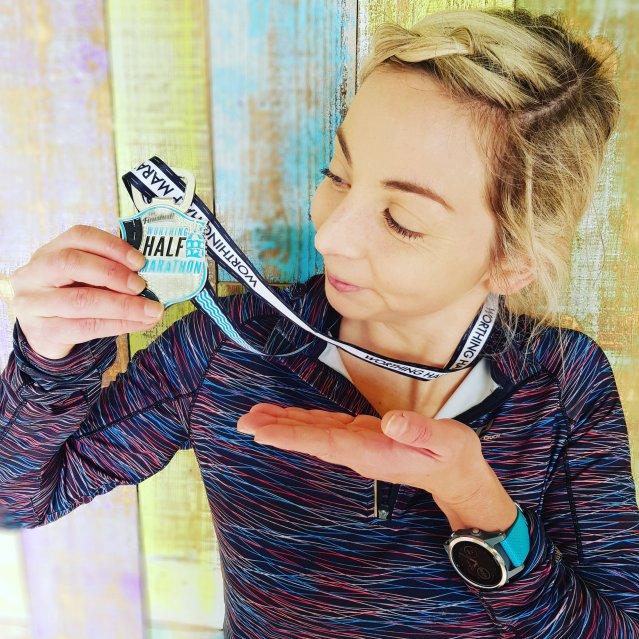 That was everything I needed to prove to myself. To be able to believe in myself and this crazy process again. To stop looking outside and most of all to stop quitting before I’ve even begun.

There’s a long long way to go, but this feels like the best kind of win!