My general rule of thumb is you should never blog angry nobody wants to read that. Well I’m a rule breaker so as I sit on a plane feeling bitter and frustrated I decide to write. Probably a bad idea.

Graz is a cute little town in Austria, it has a clock tower, cobbled streets, ice cream and a cake that translates to Mozart’s Balls. It’s about 2 hours outside Vienna, which was where I had flown into with my sister, to stay with our friend Lisa (Austrian native and tour guide extraordinaire). Lisa and her sister would be running their first half marathon in Graz and I would be running the full, because I’m an idiot and it’s a marathon and I just can’t help myself.

On the trails amongst close friends my nickname is Dik Dik, it’s a tiny member of the gazelle family and runs pretty well on its little legs, I also can be found quite often running alongside an actual Gazelle, so it fits you see. The other reason is because I am an actual dick, I don’t listen, I don’t pace, I race hard always, I do all of the things I shouldn’t do most of the time, and expect it to work. It doesn’t. This will all be proved time and time again over the next 26.2. 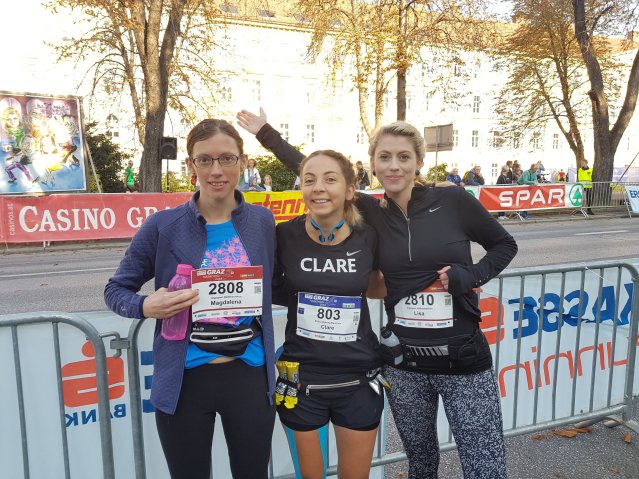 Graz Marathon is a half marathon, a relay and a full, so at the start there is quite a buzz. It is a lapped course, just 2 laps which doesn’t sound terrible right? Wrong! The laps are essentially made up of two long straight out and back roads about 3 miles each way and then a weird squiggly bit of city centre running through cobbled streets, over tram lines, alongside shops and cafes. The long out and backs are pretty tough to do once, let alone to then have to turn around and do them again. The other terrible thing about these laps is after the first lap all the half marathoners leave you, and you realise the marathon is actually tiny, and you are now all alone to tackle the drudgery of running on a hot day and uninspiring route.

I feel bad, this is not Graz’s fault, this is very much my fault!

I started ahead of the 3:45 pacer (see Dik Dik), and I set off at what felt like an easy pace, I got a message on my watch to say I was running too hard and I was like yeah whatever. My watch was reading out some weird times anything from 13 minute miles when it felt hard to 7 minute miles when it felt easy. As my mile splits beeped up it transpired that the density of the buildings was making my watch misread everything and I in fact was running way too fast. Practically my 5k pace (massive Dik Dik). It wasn’t until Mile 4 rolled around and the 3:30 pacer passed me that I realised I actually had totally fucked it and this was going to be a tough morning. The first half came and went and to be honest I felt ok. The route as I’ve said was fairly generic of a city marathon, which I am now convinced are mostly all the same, bar a few notable exceptions. There was an industrial bit, a quiet bit, a busy bit, some nice architecture a few bridges, you get the idea.

My sister was out supporting and I saw her a lot in the first half. I shouted at her how hot it was, not really sure why, but it was nice to chat and she agreed it was seriously hot. Yep in Austria in Mid-October, and I’m covered in a thick layer of salty salty sweat after the first few miles!! What?! How?! Global Warming that’s how! Any climate change deniers out there eat your heart out, I’m pretty sure this is actual proof.

I knew the second half would be super tough A) because I’m a massive Dik Dik, and 2) because the route was really shitty. I was not prepared for how shitty it would get!

So as I mentioned at the half way point all the Halfers jolly off to the finish to have a beer, and all the idiots go out for round 2. Round 2 was dead, there was no one, at one point I looked behind me down a long stretch of road and I could see not a person. I carried on pushing, but if pacing was hard in the first half with people around to pace against, it was now near impossible with no reliable data and no reliable runners. That being said I was pretty comfy up until mile 17 when it all fell apart and I wanted to die, hit all the walls, cried, threw all my toys everywhere, and also officially melted. The long stretches of out and back had very little shade, very little support, very little anything. I felt alone and tired and fed up and cheated and bitter and miserable.

By the time I saw my sister at mile 20 I was having a full on cry, she told me just one more out and back and I was done and she’d be there at the finish. She was right just 1 more out and back, but I’d already done so many out and backs, I couldn’t handle another 3 miles of long straight hot road, followed by a turning point and running the same 3 miles back. I didn’t want to! I spent the next 6 miles fighting between total toddler tantrum ‘I’m quitting’ and total wonder woman ‘fight this thing all the way to the finish you warrior goddess’. It was tough. OH and I forgot to mention the relayers! To make matters worse every so often some spritely, happy, amazing, super-fast, super fit runner would run past you making you feel like a sad, old, pathetic, shit, loser runner. So you would see no one, no one else to die alongside, and then suddenly some chump doing a relay would come whizzing past you all fresh legged, making you realise how dead on your feet you actually were!

You see I’d wanted to do something spectacular in Graz – spoiler alert – I didn’t! I wanted to be spectacular because the world had been telling me for the previous x number of weeks that I wasn’t good enough, and I wanted to prove to the world that I was good enough by running a time I hadn’t trained for, at a marathon I hadn’t trained for, in a season of racing that has broken me both physically and mentally, after a year of injury battles, and after the most stressful week of my life in recent times, see world’s biggest (and now most entitled) Dik Dik. 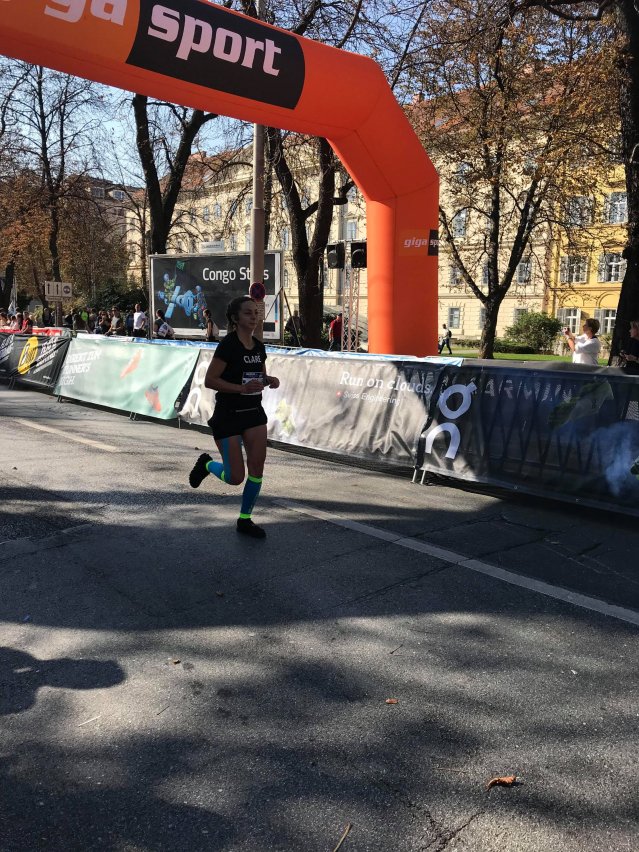 I started to ask myself why I was even there, why I was even running, what was the actual point of any of it. Then I thought about Lisa who was no doubt now finished with her First Half Marathon (Spoiler Alert – she did amazing and I love her). I thought about how she was about to experience that moment where you feel you definitely can’t do something and then you go and prove to yourself that you can do anything, anything at all, and you are an actual super woman. She was doing it for her reasons and I remember when I started doing it for mine! I got mega emotional for her and for me; and for times in our lives that feel like they are going to break us, and instead of breaking us we take all the energy both positive and negative and power it hard in to something huge! That just about got me to the finish.

I do think running and the running community has broken me a bit this year in ways I’ve shared and in ways I haven’t, so it feels fitting to step away for a while. I will still run, train, improve, chase times, chase distances, and chase puppies that I see out on the trails. I will still believe, I will still push, I will still fight, and I will probably still post lots of little square pictures. But I’m honestly jaded by it all, by what I see and what I hear and what I’ve experienced.

So yes I need to focus on doing that thing that reminds me that even when my whole world is crumbling in to tiny little unmanageable pieces of rubble I can take all that energy both positive and negative and push it in to something huge. I can start something that I might fail at, and that I can finish something and not feel like a failure.

Marathons I miss you already, but I’ll see you in the spring when hopefully I’m a little less bitter and a little more fitter