Running a marathon at night gave a whole new feel to the pre-marathon set up. My normal nervous morning routine of force feeding myself porridge and downing a coffee would now be a full day of waiting around for the clock to strike 8pm. I ate my biggest meal at lunch time, my normal pre-race meal an hour before I left, and it all felt a bit odd. I was pretty anxious leading up to it, the weather forecast didn’t look great, I felt tired and was imaging all the aches and pains. I know it sounds silly but in my 12 in 12 challenge this was the only time I would have a ‘proper’ break, it had been a full 8 weeks since the Sub4 Mega Babe, and I felt a little out of the game.

Turning up to a Sussex Trail Events race, now just eases my nerves almost instantly. When I think back to my first event of theirs, and feeling so out of my depth, it couldn’t be more different now. The people that are there are the loveliest, they are equally as crazy and likeminded as you are, and the atmosphere is always so relaxed and inviting. With this being my last* in the river series collection this year it felt like an extra special day for me at least.

Things didn’t start so well as I went to turn on my head torch, the torch I’d fully charged, and tested numerous times in the last 24 hours just would not turn on! Filled with Panic I ran to Shelley who I’d asked to bring a backup, and she had!  She’s a total life saver!! Panic over, and my heart rate settled once again

The route is 3 laps of the River Adur, running form Shoreham up to Bramber where you cross a bridge and then back down to Shoreham to cross a completely different bridge, then repeat. Due to ongoing works on the river we had to start in a slightly different way which meant running two laps of a field before we set off. I’d been running really well lately, so decided for the first time ever in a marathon that I would start right up front! I felt like a total fraud being there as I’m still such a baby to the trail running game, but I knew being around people running at the pace I wanted to go at would push me on, and it did just that.

The first lap went really well, it was still light so I could see all the obstacles in my way. The wind was somewhat behind me on the run up the river and the views even in the overcast rainy drudgery were as always a delight. I easily held the pace I wanted, and was comfortably sat in the spot of 2nd lady. Turning at Bramber to come back towards Shoreham was when it hit me. THAT HEADWIND. I know this stretch of river well I ran 14 miles of it in the Dark Star, yet somehow I seem to convince myself every time that the headwind won’t be as bad! Well folks it was real bad, and so already my pace was wavering!

Pushing through that energy sapping headwind I made my 1st lap in great time, in 2nd place, and still feeling good. I got to see my amazing cheer squad who were camping out in the cold and wet all night for me, despite having to catch a flight at 7 am!! It was time to push on.

Lap 2 was a bit of a disheartening lap for me, and where I figured out that I don’t really like laps. It got dark real quick and although my life saver of a borrowed head torch was working well, I felt lonely and tired in the dark, which made me slow up. The route I knew so clearly in the light was now so much harder as I narrowly dodged obstacles and tried to remember where the really slippery bits were. At the Bramber aid station I decided to wait a little longer for a few people as I’d hoped to run in a bit of a pack on the way back down the river, and maybe just block out some of that head wind. This meant I slipped in to 3rd lady, which although I kept telling myself was ‘totally fine’, deep down I was giving myself quite a tough time about it.

By the time Lap 3 started I was well and truly struggling. I was insanely tired and the thought of running that loop again in the pitch black, wind and rain filled me with a decent helping of dread. I set off telling myself the countdown was on, this was the final 8 miles, and giving myself all the other positive messages I needed.

The route got tricky here because the paths we had been running on were now mostly flooded with high tide. This forced us to run on the upper bank which felt so much more rutted and overgrown; the long grass tangling up in between my feet, and then I hit something (maybe a rock)! I fell! Falls are funny, and I try to keep that in the back of my mind whenever they happen to me, but when you’re alone in the dark and tired they’re also a little scary and as I picked myself up I got a little teary. Alone in the dark, muddy and a little bruised, I walked for a bit until some other people caught me up, I wanted/needed to be part of a group again, that meant dropping in to 4th. I didn’t care.

I left a little video on Instagram as I walked and got loads of positive vibes from my friends, with that and the presence of people around me I picked back up in to a jog and then a run, and felt like I had some life left in me. I felt a second wind coming, I would do this! Maybe just maybe I could still finish top 3.

Then I fell again, this time much harder and there were people around. All I’d wanted was people and now suddenly all I wanted was to be alone again. Everyone was as always very kind and I assured them I was fine and I just wanted to walk it off for a bit.

There is another bridge, one you don’t cross, which is before you get to the bridge that you do cross. A bridge that means you could cut your last lap (or any of your laps) in half and just run home and hide under your bed sheets, because your limbs are failing you. Anyone who ran by that bridge alone in the dark on their final lap and didn’t at least give it a knowing little look is a HERO! I of course would never cheat, it’s not my style, but hey it sure was a temptress in the water after 2 falls on lap3!

I walk/ran to the Bramber Aid Station for the final time, checked myself over for blood or any sticky outy bones, but alas I honestly was all fine just covered in mud.

I met a couple of guys and asked if I could follow them on the way back they said yes, and I did exactly that. The mud was thick, the river was well and truly out of its banks and the head wind, well you know about that. We chatted and I walked stretches that I felt uneasy about, I wasn’t about to have a 3rd fall, or any broken ankles. I was pretty bummed that a race I started so well could slip away from me so quickly,  but at least i knew i would definitely finish.

I won’t say I wasn’t disheartened by the run, I had more, and I should have been more. The thing I have to just replay though is I’m such a baby to the trail running game. I only ran my first trail marathon 7 months ago, and my aim then was really just to finish it! If in 7 months I’ve gone from no expectations to fighting for a place, then next year is going to hold some pretty exciting races for me. The ups and downs of running is always what spurs me on to want it more, to want to push and try and train harder. I love it. I love these events and I never ever take a day that I get to be on my feet doing this crazy stuff for granted. Although i spent a lot of the race asking myself what on earth I was doing, as those miles were in my legs and that medal round my neck, I knew exactly why.

I have to say a huge thank you to Sussex Trail Events, for putting on the best and most challenging races! Running the River Series has been the most fun I’ve had in marathons, and the medals more than make up for all the hard work, mud, sweat and tears.

I ate a doughnut, got in the car and headed home feeling ever so tired! I shouted at my husband to pull over about 5 minutes from home when I proceeded to throw up about 4 times! Running is super glamorous! I laughed to myself as people drove by probably thinking wow that girls had a heavy Saturday Night, they had no idea! 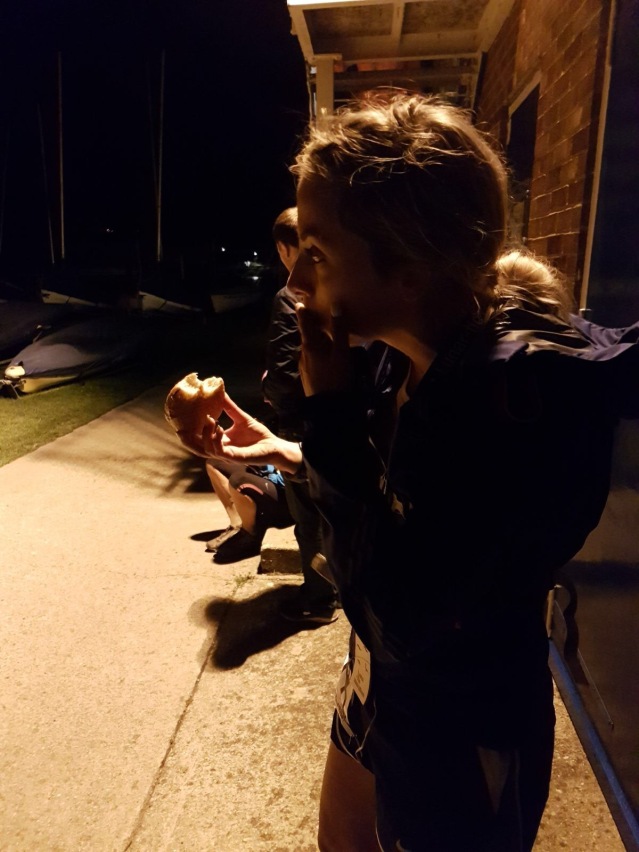 I’ve still got 5 marathons and an ultra to see out for the rest of the year, so in no way am I anywhere near done, but for now it feels like the end of one chapter at least and that always means the start of something new…

*as I write this I know there is a space for and a plan for a 5th race, a 5th medal to complete this set, but for now until that is fully confirmed. Im classing this as my completed set, let me have it 😉

I met this lady when I turned up at a run club feeling out of my depth having signed up for Brighton marathon. Since then she has become a huge part of my life. She is the reason I turned up to my first trail marathon, the reason I am doing my first ultra (and my second, and probably third), and the reason I know about Sussex Trail Events at all… And guess what this week she is having a baby!

If you know her then you know her story, you know about Rosie and you know what an incredible mum she will be to baby Pumpkin Potter (official name pending)!

If you don’t know her then you should, she will inspire you on the daily and support you on all the crazy running adventures. Whenever I say hey Shelley could I run X she immediately says yes and then tells me what I need to do to get there! This race is for you Mumma Runner, because I would have never made it to the start of the river series without your support, and I would never have made it to the end of this one without your head torch 😉

Sands is the stillbirth and neonatal death charity. They operate throughout the UK, supporting anyone affected by the death of a baby, working to improve the care bereaved parents receive, and promoting research to reduce the loss of babies’ lives. For Shelley and Mark and all the other mums and dads I will be donating my race fees to Sands, and if you would like to donate then please do so via this link. As always there are so many ways to help other than just monetary, so do have a look at their website if you want to know other ways to support.