You remember that time (about 4 weeks ago) when I said that Dark Star was going to be my hardest Marathon of the year, well I massively lied!

Yesterday I woke up at 5:45 and tried to get dressed in the dark and make minimal noise to not wake anyone up (mainly the dog). I shoved a bagel in my mouth, poured a hot cup of coffee to go and jumped in the car! Having a 10am race start last weekend made this 8am kick off feel tough!

The rain was already pelting out of the sky as I stepped in to race registration for the Steyning Stinger Marathon. It was nice to see so many friendly faces, some who are well versed at this race and were ready to offer advice. People were dropping from the full to the half like flies, and I’d heard from my friend Graham and marshal out on course that is was particularly horrendous. I said in my head that I wasn’t going to drop down to the half as I knew if I gave myself that out, I might just take it.

The stinger operates a staggered start depending on how long you think you will take, and I was aiming for around 5 hours so opted for the 8am start, it just so happened that this was in the peak of one of many torrential downpours that day. I had two nervous wees, chucked my clean clothes in the bag drop for after, and headed out in to rain after a little ‘you can do it’ pep talk in the mirror. 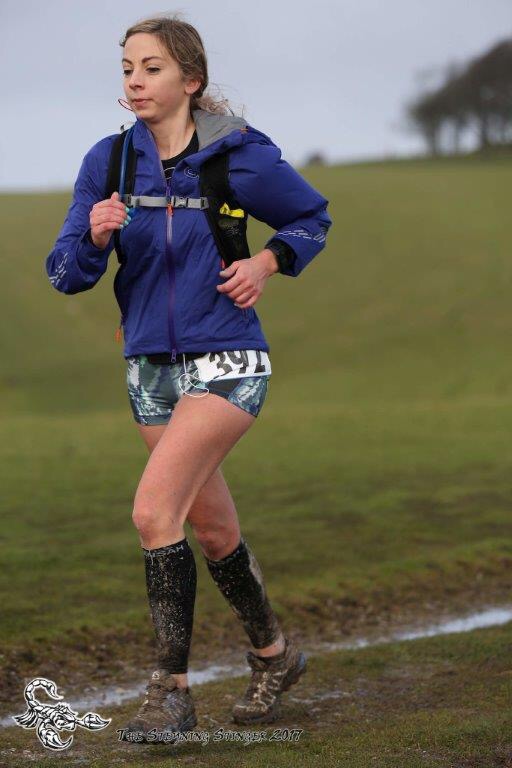 The initial 5 miles leading to that first sting were wet and muddy but surprisingly enjoyable! I was wearing my Omm waterproof and I’m so glad I was! I hopped between small puddles and dry patches, before throwing in the towel and just running through whatever was in front of me. I know I’m rather tiny but some of these ‘puddles’ were coming up to my knees!

The First big climb is one I was familiar with from the M2M marathon I ran in December, in much more favourable conditions. I told myself I would run to the photographer perched about 1/3 way up and then walk the rest. This Hill is no ordinary hill, it tires you out just walking it let alone running it! At mile 5 on a tough day I wanted to conserve some energy! As I hit the top the wind pretty much punched me in the face, and just kept on punching! As we’ve covered I am a particularly small human, but I’m still a human, and this wind was literally blowing me sideways. If I would have had an umbrella (or a cape) on me I’m pretty certain I could have taken flight! 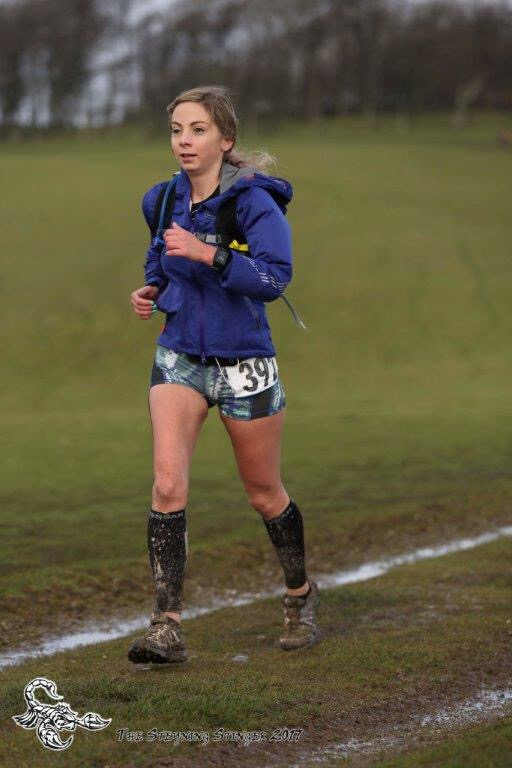 I was happy for the next climb up to Chanctonbury as it was fairly well protected and gave me a chance to get some of the mud off my shoes. This is a climb I know well and I swear your legs remember hills as I found this one a lot easier. The rain had stopped, the sun was even creeping through the clouds! I stopped to take a quick snap…

The chanctonbury to Cissbury section was a delight, I really love this leg when I head out on my own, plus I knew my support team were waiting at Cissbury as was the half way sign! As I approached the cross road for the straight on (half Marathon) or turn right (full marathon) there was a little voice in my head that said you could just finish now, but I knew that was not an option for me, not today (despite some guy telling me I was going the wrong way)!

The mud was so thick and churned up in places that it either made it impossible to run on, or sapped all your energy for trying. I’ve never run for that long in weather that was truly that gruelling. It kept you on your toes, adding and dropping layers, cursing mother nature! 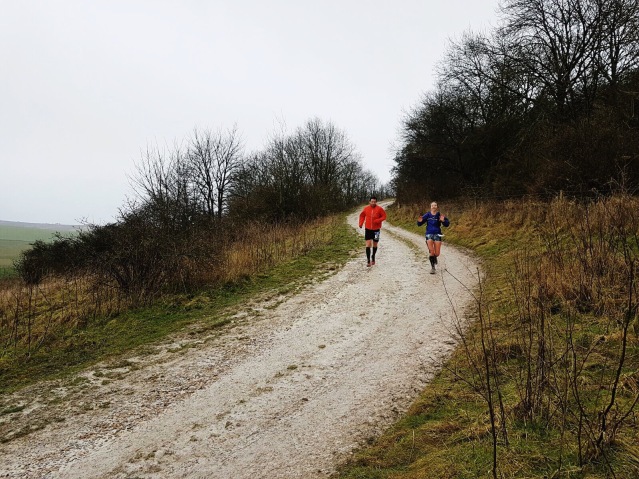 At about mile 15 kev caught me (he’d started a half hour after me), I was pretty pleased to see him as everything was feeling rather tired. We ran a little bit and I told him I was walking the big hills but he could run off, guilt free, and not worry about me. True to form he said he’d run with me and he kept his word. As we reached the next climb the sideways hail started and I had a little are you f***ing kidding me swear (sorry mum)!! Kev and I ticked off the next 4 miles pretty comfortably, being pelted in the face by rain, hail and mud! We chatted, ran/walked the ups and flew down the downs. 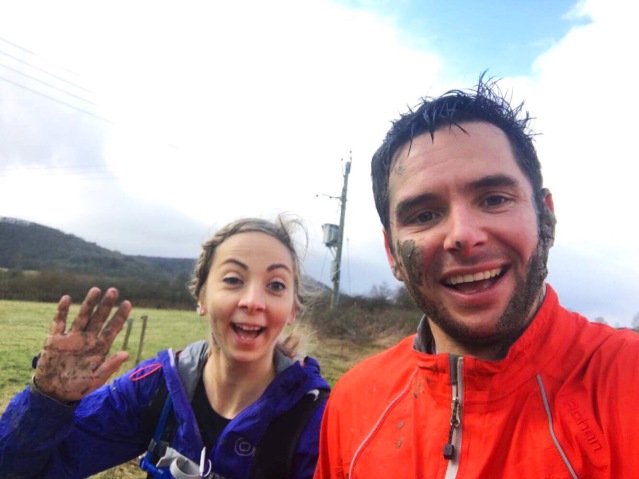 On cue the sun came out and we bumped in to Andy who had started 30 minutes before me and who’d I’d hoped to catch up with at some point. It was my first time meeting Andy off of that old Instagram thing (if you’re not following him you should)! I’d given him a ginormous hug when I’d seen him that morning at registration and our friendship seemed pretty much sealed.

I introduced Andy and Kev and they shared their truly inspiring stories and experiences of mental health; starting conversations and campaigns, removing the stigma, supporting so many people, taking on crazy challenges, raising money and awareness. I felt a little inadequate to be in their company and part of the discussion, so much so that I threw myself on the floor…HA! In my head this was my next attempt at flying and it probably resembled something of a superman leap… It was luckily not a nasty fall, and I was able to dust myself off with just a  shade of embarrassment, cuts/grazes, and a little more mud. It’s not a trail race without a fall right?

Kev and I ran on a bit ahead and deep in conversation decided to follow the two guys running in front of us. They went the wrong way, and YEP we followed. Half way down a hill Kev realised and we had to turn and head back up, YEP an additional hill. We caught a bemused Andy who had no idea how we were once in front and now behind him. We decided to stick it out for the remainder of the race together with just 5 miles to go!

As we climbed the final very very very long hill, we chatted and laughed and I couldn’t have felt happier; the beautiful scenery, great company, and that sunshine was back! That lasted for all of 10 minutes and as a black cloud loomed, Andy told us to run on! We said no which I’m not sure if he was happy about or not! We were going to finish this thing together, as the wind whipped up a storm, and the hail returned, GRIM!

It was so totally miserable that the only course of action was to turn it into a laugh, kev pushed me in to the mud and so I retaliated and we had a rather childish 20 minutes or so forgetting how pained, cold, wet and muddy we were, oh and that I’d now been running for the best part of 5 hours.

Seeing the finish line was such a welcome sight, and crossing it with friends who could have quite easily decided to run their own race and leave me on my own, was a great feeling! It reaffirmed everything I know and love about running. Covered in mud, blood and smiles I got back to race HQ and engulfed that free breakfast. 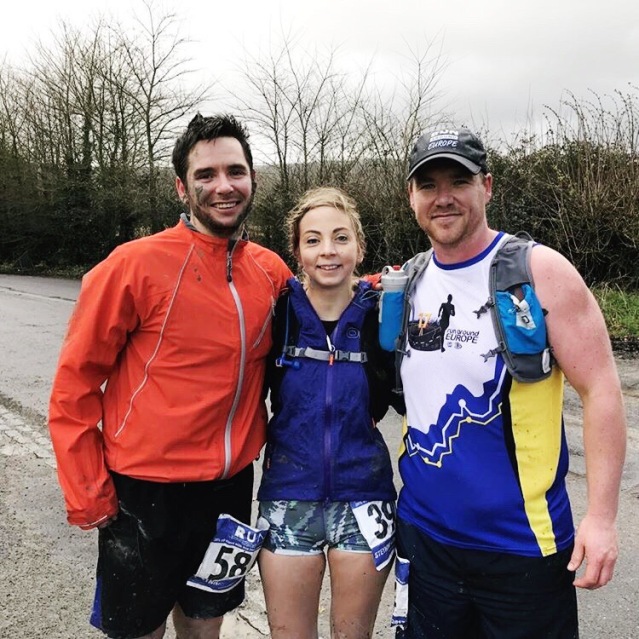 Truth be told I’d run it again in a heartbeat, It was a great challenging course, and an absolutely stunning route minus the black skies and changing seasons. It’s definitely a race that will have you questioning if the pain is worth it, but as always the answer has to be YES!

I am now hoping that this in fact was my hardest marathon of the year, and the rest will be a delight! People that’s 2 down, 10 to go!

#clareruns12in12 Marathon #2 charity
As you know I’m picking a charity and donating my race costs to them for each of the 12 marathons in #clareruns12in12. As this race came down to the importance of friendship and making truly great memories I don’t think I could choose to highlight a better cause for a better person.

Maz is running the London Marathon for Alzheimers Research Uk, and as they were always due to be on my list of charities I asked her if I could highlight her page and story for one of the 12 in 12 runs. Reading her charity page makes me feel incredibly emotional, and I honestly don’t know how I would cope with what her family has been through. I love seeing her journey towards running London Marathon, and all the progress she is making (including beating me at ParkRun).

This terrible disease really is just part of the story. The impact it has on the people that love and care for those suffering with it truly is staggering, and it can sadly result in even more pain.

I will let her tell her own story via her page, but it’s my pleasure to donate my race costs to this cause and her journey, and I can’t wait to see what she’s capable of at London (I am of course totally jealous). If you would like to support me for #clareruns12in12 and would like to donate to Alzheimers Research uk then please do so via Marianne’s fundraising page. Equally if you would like to find out more on how you can help in other non-monetary ways then please visit their volunteer pages.